Hello! I'm back again with a new //TODO: today devlog on Character Design for you! (ง •ૅ౪•᷄)ว

✧ﾟHere's a link to the previous Character Design Pt.1 °✧

Have you ever once wondered what natural hair-colour Phoenix has? Is Phoenix a natural red-head with light blond ombre hair? Or does the colour of Phoenix's hair just fade naturally because it just looks so cool? Well, now you wonder! And the truth will be revealed when I go through Phoenix's design and explore their origins. Unlike the the first part about character design this part won't address the work process in Clip Studio Paint and Photoshop but rather the thoughts behind creating Phoenix's design. Although this is now the second part of the Character Design series, Phoenix....wasn't the second character I started conceptualzing for //TODO: today. We initally had more information on Teal and Joyce than any other character. Our modest crush inducing hotty Phoenix had a pretty short list of characteristics in the beginning of March.

We kind of knew that he or she:

Before inspiration hit us with more details and a backstory about Phoenix, I had to think of some more character traits to narrow down the range of my designs. This was necessary considering I only had a maximum time frame of one week to design six characters and nine if you count the female and male versions seperately. Fortunately we got the names of our characters down very quickly and chose to use "telling names" for our character cast. Which means that every name explains a good chunk of the character already. So I took the name and what we already had about Phoenix and added these ideas to them:

I felt that Phoenix would have to be more fashionable than Teal or at least show they cared about their appearance without being blatant about it. Here I'd like to note that's it's important to get your inspirations from different sources. I got the key idea for Phoenix's outfit while browsing Instagram, where I mainly follow fashion related accounts and some 2D artists. Yeah, and what I found was "grunge". But before I could draw Phoenix wearing band shirts and ripped jeans, I had to further understand what the meaning of grunge fashion was. So I looked on different sites online. This is what Wikipedia says about grunge fashion:

"Grunge fashion is characterized by durable and timeless thrift-store clothing, often worn in a loose, androgynous manner to de-emphasize the silhouette. "

Besides it's kind of funny how orignally grunge had the notion of being anti-fashion but turned into a really popular style as of today. Incidentally it matches Phoenix perfectly in many ways. I wouldn't want to spoiler anything so let's just say that Phoenix somehow did a metaphorical "rise from the ashes"-thing in their past and became lovable by just being themself. 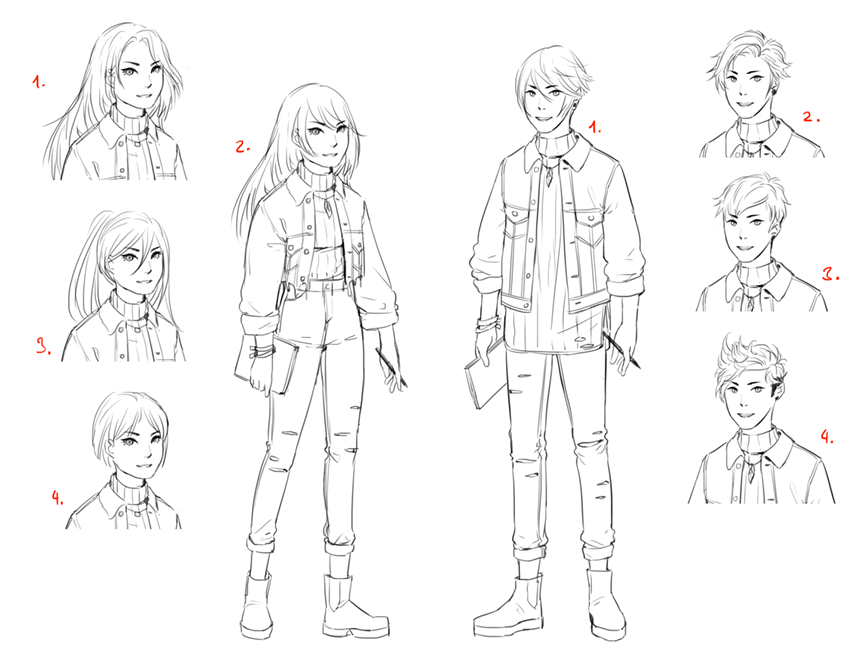 We chose hairstyle 2 from each version for the characters.

I sketched out the outfit for Phoenix first before deciding for a hairstyle. I did the same with Teal before but this isn't a fixed work flow. I just felt that the right outfit was easier to find than the matching hairstyle. Like I mentioned in the previous Character Design devlog I coloured the character outlines in alignment with every other character.

Here are breakdowns of Phoenix's look, on two levels – the functional design of it and the implications of the outfit: 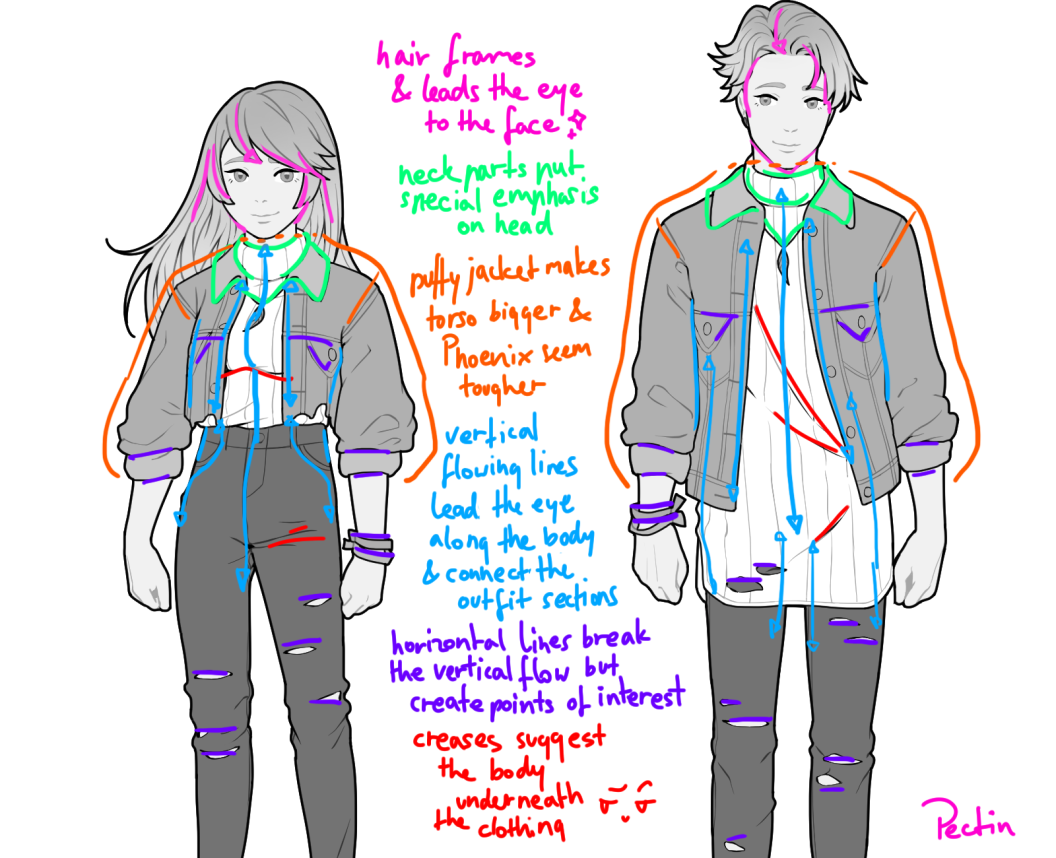 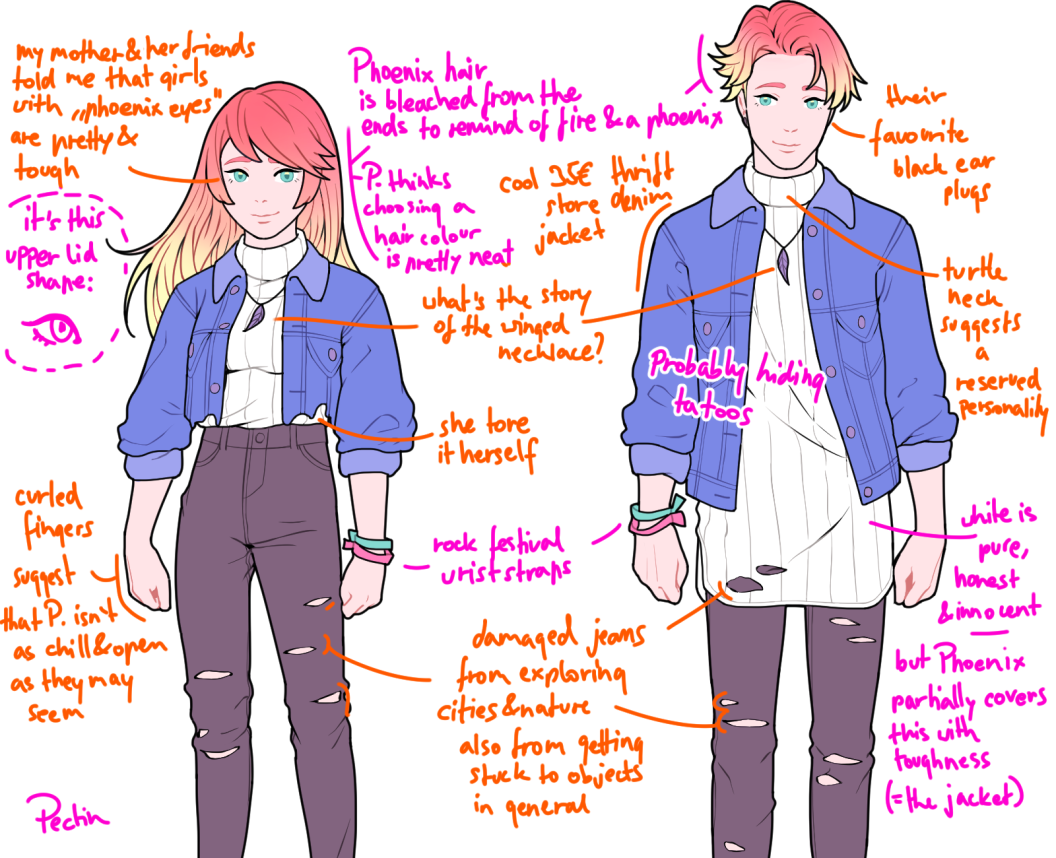 That's that. Thanks for reading! And sorry for the cheesy intro..! ヽ(*´∀`)ﾉ